While I am not a big fan of making guns compact “just because,” the SW-99 pulls it off much better than many. I doubt seriously our belts can tell the 2.7 ounce difference in weight, but concealment may be a tad easier and the size is also likely to appeal to those with small hands. So the bottom line is if you like the compact size you’ve got a good choice here.

Smith & Wesson’s Model 41: collectibles, edibles, and a lesson in history

Although the Model 41 is still considered a target pistol, mine is destined for another service — mainly gathering edibles on the trail. With a 5″ barrel, the Model 41 carries nicely on the side in an Uncle Mike’s holster Number 8105-1 Size 5.

Shooting the 952 reminds me a little of the Model 52, primarily because of the grip shape, but everything else simply happens faster. With the 52, slide movement was slow and it was possible to feel the several components of the slide cycle. You’d even see the empty case hop leisurely out of the port. Not so with the 952. Slide movement was brisk and empties were thrown well clear. The weight really makes recoil be nearly negligible and the accuracy leaves little to be desired. It has none of the difficulties of the Model 52 and is just as much fun. I believe this is what handgun shooting is all about.

Smith & Wesson Model Compact: Good looking and great shooting, petty finds that there is a lot to like about this new offering from the S&W performance center

Smith & Wesson has added considerably to its line of Third Generation pistols with a Tactical Series that includes guns chambered for 9mm, .40 S&W and .45 ACP. The Tactical models have features formerly found only on guns from S&W’s Performance Center. Foremost of these is a change in the slide and frame that provides full length contact between the two parts. The second is a change in the barrel lockup geometry that delays unlocking for a tiny fraction of a second longer.

The gun is extremely compact with a 3-inch barrel, 6 inches long, 4 inches high and 1-inch wide. Small enough to fit into the sight channel, but quite visible, is a blade front sight and notch rear sight. There are no external controls, presenting a clean profile with nothing to snag and no manual of arms to perform between drawing and firing the gun.

At the 2003 SHOT Show, Smith & Wesson introduced to the shooting industry a new and massive revolver, built on what they refer to as their new X-frame. The new frame was built especially for their newest handgun cartridge: the .500 Smith & Wesson Magnum. The new frame is the largest ever built by S&W, but with a few changes is very similar to the double-action design that has proven reliable for over 100 years.

With its 8-3/8-in. barrel, the overall length of the Model 500 is 15 in. and the empty weight is 4.5 pounds. The cylinder alone is almost 2 in. in diameter and approaches 2.25 in. in length. Thumb the cylinder open and five charge holes await. Each is 1/2 in. in diameter, and the .50-cal. cartridges they hold are almost 2 in. long. Load five of them and the total weight of the handgun climbs to 5 pounds.

There are enough sixgunners desiring the biggest, baddest and latest handgun, that Smith & Wesson’s production line should be kept busy producing Model 500s for a long time. The King is back on the throne. Long Live the King.

The 29 is gone, however the 629 remains in both standard production and Performance Center Models. The original 629 is only available with a 4″ or 6″ barrel. while heavy under lug versions are cataloged with 5″, 6 1/2″, and 8 3/8″ barrels all with round butts.

I have always been a big fan of pocket revolvers, especially those that wear the S&W trail brand, so when I heard the rumor they were crafting their racy looking Centennials from super lightweight, space age titanium, I knew I had to own one.

The original Model 27 has given way to a new generation of N-frames. Heavy-ribbed and under-lugged barrels replace the visually pleasing slender barrels of past decades. Ergonomics have supplanted elegance in the current generation of target grips. Overall richness of fit and finish has undergone subtle alteration with the transfer to new production technology. While the modern inheritors of the tradition often present significant utilitarian improvement, the visual and tactile impact of the Original Magnum makes us wonder what we have given up in the translation.

The enclosed hammer, double-action concept, first applied to the Safety Hammerless in the late 1880s, endures to the present time and its 20th century heirs are already regarded as modern classics.

For those most interested in singleand double-action sixguns, Smith & Wesson’s new Model 3 Schofield is worthy of large headlines. This is the first single-action introduction from Smith & Wesson since the company dropped the New Model #3 in 1912.

I honestly thought we would never see a newly manufactured, blue steel, fixed sight, big-bore Smith & Wesson revolver again. But we did, and I’m darn glad I’ve got mine, thanks to Clint and Smith & Wesson.

The .40 Smith & Wesson: this round came along at the right time in the right place

When Smith & Wesson and Winchester teamed up to introduce the .40 S&W in 1990 their timing could not have been more opportune.

Smith & Wesson is one of the world’s most recognizable and innovative gun manufacturers. Today’s active shooters, gunsmiths and collectors have a particular interest in the guns that have been used by nearly every major law and military agency in the world. This definitive resource reviews Smith & Wesson guns on a model-by-model basis, giving enthusiasts a brief history, a review of technical specifications, and a report on test shooting and performance for each.

The book covers all categories of Smith & Wesson arms, including revolvers, automatic pistols and long guns. A special chapter gives readers a tour of the Smith & Wesson factory and corporation, and other features include a look at competition uses, Smith & Wesson rarities, and use of the weapons in law enforcement.

Collectors of Smith & Wesson products cannot be without this book! More than 775 models of guns and variations produced by Smith & Wesson since 1857 are completely listed according to model and year of manufacture with accurate, updated prices in up to five grades of condition. Production and historical notes provide important background data for determining rarity.

Many models found in this book are not found in other firearm-pricing guides making this the most comprehensive list of Smith & Wesson products and prices available. The finest Smith & Wesson collectibles are showcased in sixteen full-color pages.

The History of Smith & Wesson Firearms

This fascinating book provides a detailed history of one of the most famous, and controversial, firearms manufacturers, and its products. Smith & Wesson was founded in 1852 by two men, Horace Smith and Daniel B. Wesson who shared a dream of developing a new type of firearm, one capable of being fired repeatedly without the annoyance of having to reload with loose powder, ball, and primer. Their ideas moved firearms manufacturing out of the muzzleloading era that had dominated the industry since the invention of the hand cannon in the 14th century.

Since then, the company has produced countless pistols and revolvers that have become standard issue to police and armed forces throughout the world, and which have also been used by sport shooters and criminals. In addition, these famous firearms have been featured in several sensational Hollywood movies, including Dirty Harry. Complete with more than 200 full-color photographs, this stunning book describes the range of Smith & Wesson firearms in detail, and features cutaway drawings to show the mechanisms, along with detailed technical evaluations. As well as being of interest to enthusiasts and historians, it will be an excellent reference work and an invaluable guide for collectors.

Countless photos and detailed technical drawings. The Schofields, The Americans, The Russians, The New Model #3s, and The DAs. Here in a single large volume is a very comprehensive history of the Model Three going back to the Robbins and Lawrence factory where we are reasonably certain Daniel Smith met Horace Wesson around 1850. It tracks their progress through their first company, where they invented what became the Winchester 13 years later, the development of the first practical cartridge firearms (the S&W Model One) through the Two’s, One and a Half’s, and finally the Model Threes. It’s all here in a comprehensive entertaining manner accompanied by fabulous photographs and diagrams.

This book is also a gunsmith’s dream with page after page of carefully written and illustrated information on how to diagnose and repair every Model Three AND every modern Model Three copy. In addition there are chapters on ammunition and, for the shooter, loading and reloading. Did I say comprehensive? Well written? Beautifully illustrated? Awesome? A long over due and welcomed volume.

Tales of the Gun: Guns of S&W

They laid the groundwork for the Winchester Repeating Rifle and put a cartridge 6-shooter in the West years before Colt’s Peacemaker. Their spirit of innovation has led handgun technology for over a century. Meet Horace Smith and Daniel Baird Wesson, and see why the company forged from their partnership remains at the industry’s vanguard.


2021-01-13
admin
Previous: Cops Arrive in Time to Draw Chalk Lines
Next: The Police Can’t Stop an Intruder, Mugger, or Stalker From Hurting You 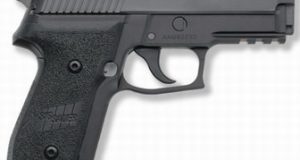