Adding a firearm silencer or suppressor to your rifle or hand-gun can greatly improve the pleasure of your shooting experience. Over a long period of exposure, shooting can permanently damage your hearing – even if you are wearing firearm hearing protection.

Homemade gun silencers are not difficult to build for most types of firearms. You can build a homemade rifle or pistol silencer in a small home workshop.

Be certain to check all applicable Federal, State, and Local laws before purchasing, building, or installing a gun silencer or suppressor.

How to Make a Silencer

Plans to make a firearm silencer from a PVC pipe.

Plans to build a firearm silencer from PVC pipe.

The Use of Firearm Sound Suppressors for Wildlife Management

Describes the use of firearm silencers for animal control.

How does a firearm silencer work?

Explanation of how a firearm silencer works from How Stuff Works

Forget what you’ve seen on TV or read in The Poor Man’s James Bond – the facts about sound suppressors will surprise you.

Review and technical information on early suppressors for the M-16

On the Control of Silencers in the United States

In 1934 a bill was passed levying a tax of $200 (4 times the price of a Thompson submachine gun at the time.) on future sales of machine guns. Short-barreled rifles and shotguns, cane guns and silencers were also thrown into the bill, almost as an afterthought. The BATF was set up, and one of its functions today is to collect such a tax. So much of the controversy dealing with Title II weapons is not that they are illegal, but that a tax will be levied on their ownership. Owning one which is not properly registered and taxed is a violation of federal tax code (tax evasion) a felony punishable by large fines and up to ten years in prison.

Expired patents are a great source of technical information and schematics for building homemade silencers.

Each patent application is effectively a set of gun silencer plans.

Firearm silencer including side branch chamber

Flash eliminator and silencer for firearms

Firearm barrel for silent launching of a projectile

Silencers for firearm, internal combustion engines, or the like

Sound suppressor for a firearm

Device for silencing firearms and cannon

Self cleaning automatic machine pistol and silencer for the same

Owner’s manual for the BR MX/MG Sound Moderators for 9mm and 7.65mm Pistols

New Zealand based manufacturer of .22 and .223 caliber firearm suppressors.

Manufacturer of custom firearms and suppressors.

Integral silencers for the Ruger 10-22, Ruger 77-22, and Ruger MKII. Screw-on silencers for other .22 caliber handguns and rifles.

SAK is a Finnish manufacturer of .22 caliber pistol suppressors and suppressor adapters

SilencerCo was formed in 2008 with the goal of bringing the most innovative silencers to the market.

Maker of the Whispers line of firearm suppressors, from 6mm up to .50 caliber.

Threaded gun silencers for many popular guns. STW silencers are installed inside a heavy barrel, giving them the look and feel of integral silencers, and yet allowing removal of the silencer.

The Riddle of Steel

American manufacturer of a wide range of rifle and pistol silencers and thread adapters.

Elite Firearms is a Kentucky-based distributor of Advanced Armament, GemTech, and other gun suppressors

Lyddemper is a Finnish reseller of BR Reflex suppressors

Books on Firearm Silencers and Suppressors

This illustrated report on suppressor technology presents innovative designs of well-known suppressor manufacturers and offers definitive comparisons of models based on prices, features, kits, independent manufacturers and technological advances. It also examines the history of the gun silencer and the attitudes of the U.S. government, the public and terrorists about its usage.

Learn how to make firearm silencers from common items found around the house. George Hayduke, the Master of Revenge, will show you how! Enter the world of muffled mayhem with these simple, effective and legal firearm silencer designs. For information purposes only.

Silent But Deadly: More Homemade Silencers From Hayduke The Master

Despite what the Brady bunch might say, gun silencers serve some very civilized functions and contribute to a saner, quieter way of life, which is why a lot of folks like them. After reading The Hayduke Silencer Book, many readers shared their own ideas for simple designs you can build at home, legally. Here is the cream of the crop.

This handy little manual teaches you everything you need to know to legally manufacture a .22 rifle or pistol silencer – without a lathe or welder. These inexpensive homemade silencers give you all the suppression you need, thread on solidly, do not affect your accuracy or the gun’s functioning and last for hundreds of rounds. For academic study only.

Because it does not produce a sonic “crack,” the .45 is an ideal pistol for a silencer. Here is a nuts-and-bolts guide to making your own silencer for the Colt 1911 Government Model .45 and its clones. Includes construction details for all components, manufacturing tips that will save you time and effort, and plenty of clear illustrations. For academic study only.

This is the most significant book on firearm silencers in years. Find out the story behind and incredible capabilities of modern silencers used by elite military units and secretive government agencies. Author Alan Paulson has been called “the dean of the American silencer experts today.”

This highly anticipated second volume in the Silencer History and Performance series provides an unprecedented look into the evolution, tactical employment and performance of historic and state-of-the-art silenced firearms suitable for close-quarters combat, long-distance sniping and other professional applications. It chronicles the production of pioneering silenced weapons used during World War II and the Cold War as well as the more sophisticated low-signature designs and tactics that emerged from the Vietnam War and again during an explosion of creative development in the 1990s. The authors have combined recently declassified materials, numerous confidential sources and years of hands-on evaluations to reveal a wealth of information about today’s incredible screw-on and integral suppressors.

Here is a slew of new and interesting improvised silencer designs featuring innovative couplings plus variations on aluminum cans, oil filters, PVC pipe, plumbing devices, water sprinkler pieces and other unique materials. Warning: It is illegal to possess or make firearm silencers without BATF registration. For academic study only.

How To Make A Silencer For A Mini-14

The Ruger Mini-14 may be the ultimate plinker, hunting and survival rifle. If you already have the many accessories available for it, why not complete your collection with a do-it-yourself silencer? Here are step-by-step instructions to show you how to construct a tough, working silencer able to handle the high pressures generated by the Mini-14’s .223 round. All BATF rules apply.

One of the world’s foremost experts, Siegfried Huebner has published numerous books and articles in his native Germany, and he has drawn from extensive research at the Mauser works, Heckler & Koch and the German army proving ground to bring to you this, his first English-language text on silencers. This complete and authoritative guide includes chapters on the principles of silencers, WWII silencers, clandestine weapons and more. 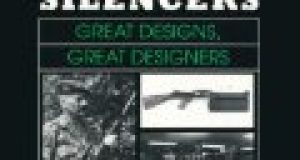 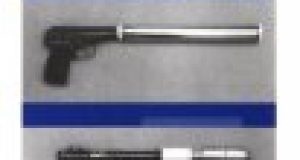 How to Make a Silencer